From Edo to Meiji era. In this turbulent era.
In the turbulent times of the Edo and Meiji eras, the production of tea in Kakegawa-Hisaka-Tozan began.

Kakegawa and Nisaka Higashiyama were inn towns along the Fifty-three Stages of the Tokaido Highway, and transportation had long been established as a major industry. However, the great changes of the Meiji era (1868-1912) completely changed this industrial structure. Many of the people involved in the traffic along the roads turned to new livelihoods such as agriculture. Shinpei Otsuka, the founder of Otsuka Seicha, was one of them.

In 1871, the Oigawa River was abolished and replaced by the ferry system, and the Kawagoe jinrikisha who had been engaged in river ferrying lost their jobs. The Kawagoe-jin'uma lost their jobs. The Kawagoe-jin'uma received a loan from the Kakegawa clan to cultivate the land and start farming. At that time, Shinpei Otsuka was at the center of a group of about 20 families that cultivated about 374 towns in the Imperial Forest. His proactive cultivation laid the foundation for the area to become the famous tea-producing region it is today. 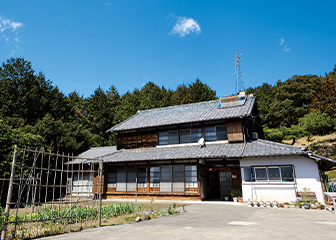 ▲ Birthplace of the founder, Shinpei Otsuka